Hawaii is home to several nationally designated protected areas that preserve and celebrate the islands’ unique culture and beauty, particularly on the Big Island.

The National Parks Service celebrates 100 years in 2016! You can enjoy free admission on special days. Click here for the list of free admission days. 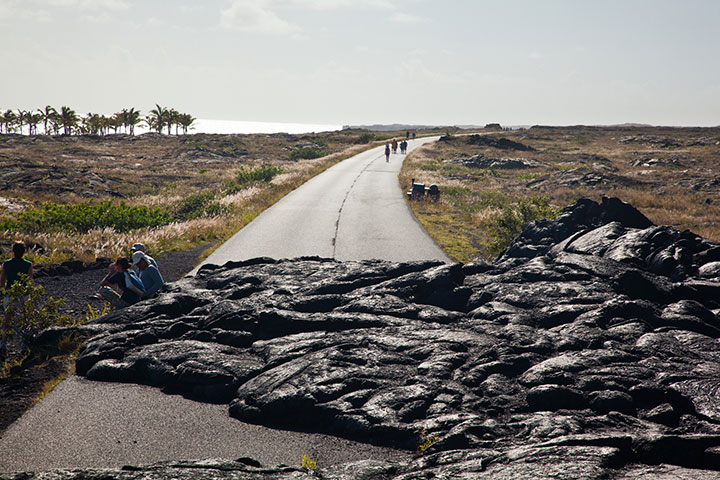 A national park is a reserve of natural land designated for conservation of its nature as a symbol of national pride. Hawaii Volcanoes National Park is one such magnificent place. Monuments to Earth’s origin, volcanoes remind us that the creative forces of nature are alive and well. Hawaii Volcanoes National Park is located 30 miles southwest of Hilo and is home to one of the most active volcanoes on earth, Kilauea. This sacred place is the most visited attraction in Hawaii, and is a reminder that our planet is constantly changing with environmental powers beyond our control.

Haleakalā is the lone National Park on the island of Maui. Quite possibly the best thing to do on Maui,watching the sunrise from Haleakalā’s 10,000 foot summit draws thousands each year. Those looking to beat the crowds will go for sunset and catch stunning views of the star filled sky. Haleakalā National Park spans over 33,200 acres encompassing otherworldly terrain excellent for hiking and horseback rides.

Related to a National Park, but having a separate designation, is a National Historical Park, an area that extends beyond a single property and building, and encompasses significant historic and natural features.Puuhonua o Honaunau, located on Honaunau Bay in south Kona, is a 180 acre national historic park that was once a place of refuge for early Hawaiians who had broken sacred laws (kapu) and faced punishment by death. Their only chance of survival was to escape their pursuers and reach the place of refuge where they were guaranteed protection within the boundaries of the refuge.

Located in Kailua-Kona, Kaloko-Honokohau National Historical Park is a reverent and historical place of importance and tradition. It is located on the western or ‘leeward’ side of the Big Island which is hot and arid. In order to survive in this environment, native Hawaiians developed critical fishing skills and constructed elaborate fishponds located throughout the park. With their ability to locate the rare and valuable fresh water that flows into these ponds, native Hawaiians created a tradition of reverence and respect for this area that was so important to their survival.

Hawaii is the most geographically isolated location in the world. Furthermore, some might say that Kalaupapa is the most isolated place in Hawaii. A peninsula that juts out from some of the tallest sea cliffs in the world, Kalaupapa served as a prison of sorts for Hansen’s disease (leprosy) patients since 1866. In the early years, those who had contracted leprosy were thrown overboard into the ocean off of Kalaupapa. They swam to shore and lived out their remaining years, banished to a beautiful yet lonely place. Today, Hansen’s disease is curable, and patients are no longer confined to Kalaupapa, though many have chosen to stay. Kalaupapa remains isolated as the only ways to reach here are by boat, plane or a steep hike. Mule rides are also offered in lieu of the hike.

Meaning “Trail Along the Shoreline” in Hawaiian, Ala Kahakai National Historic Trail is exactly that – a trail that traverses 175 miles of shoreline along the Kohala and Kona districts of the Big Island. This is the trail that the ancient Hawaiians once used to travel up and down the coast. This trail runs through ancient, historical sites as well as some of the Big Island’s most luxurious resorts. Marine life, birds and coastal flowers are some of the sites to see.